We spent part of our Christmas Day on Orkney watching the “Ba”, a sort of cross between rugby and football played in the streets of Kirkwall between the “Uppies” and the “Doonies” – traditionally the side you’re on being dependant on where you were born in Kirkwall. Apparently this Christmas and New Year Day event has been played in its current form since about 1850, but it has a much older history than that.

The action, for the most part, resembles a giant, disorganised, free-for-all scrum that occasionally breaks apart when one of the two teams manages to run the Ba (an old-fashioned style brown leather stitched football) nearer to the opposition goal line at either end of Kirkwall’s Broad Street. The scrum then quickly re-forms in a different part of the street as the two teams re-organise to defend their lines or push for another advantage.

It’s a chaotic and (if we’re being honest) fairly ridiculous affair that can go on for hours before a winner is declared. However, I’m all in favour of keeping alive these local traditions as they form part of our social history and unfortunately we have precious few of them left. It’s also good to see that the Ba attracts a healthy turn-out of local (and in our case, not so local) spectators – no mean achievement on the day we attended because it was freezing and pouring with rain (which did have the benefit of giving the weather-sealing on my new camera and lens a good work-out…..which thankfully they passed).

Daft as the Ba is….long may it continue: 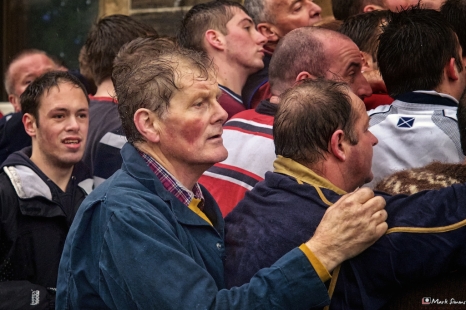 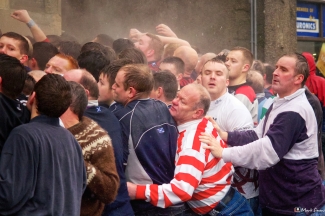 Unfortunately I didn’t get a shot of the Ba itself, but trust me it is in there somewhere…..;0).

If you would like to read more about the Ba and its history then I would encourage you to take a look here.