For my first post since returning from a fantastic two-week holiday to the wonderful Orkney Isles just off Scotland’s north coast, I’ve decided to share with you an image of Maeshowe, a fantastic Neolithic chambered tomb which dates from about 2700BC. I think this image encapsulates the essence of Orkney – big skies, wide open landscapes and stunning cultural heritage.

Maeshowe, which is run by Historic Scotland, is widely regarded as one of the finest examples of its type anywhere in Europe. It forms part of the “Heart of Neolithic Orkney” a designated UNESCO World Heritage Site that also includes the Ness of Brodgar, the Ring of Brodgar, the Stones of Stenness and Skara Brae. The fact that all these occur in Orkney’s West Mainland makes it one of the highest concentrations of Neolithic sites anywhere in the world. The remarkable thing is that the UNESCO designation only covers a handful of the dozens of known pre-historic sites that are dotted through-out the rest of the Orkney Isles. If that wasn’t enough, according to the experts, there are no doubt more sites as yet undiscovered.

Unfortunately, although we were able to go inside the tomb on a guided tour, we weren’t allowed to take any shots of the interior. I’d love to return to Maeshowe for the Winter Solstice, because the tomb is aligned so that those fortunate enough to be standing in the main chamber on the shortest day of the year, get to see the light of the setting sun slowly creep up the narrow, low passageway and eventually fill the inner chamber with a magical golden glow. For those not so fortunate Historic Scotland do live-stream the event each winter at www.maeshowe.co.uk. 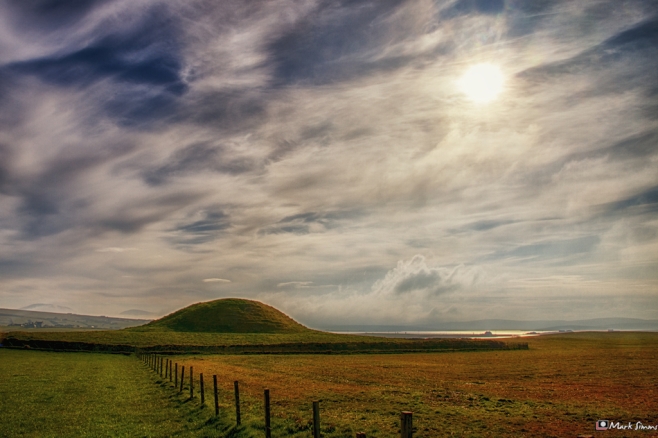 The above shot is a HDR image made up of five bracketed exposures and then processed in Nik’s HDR Efex Pro2.

I took over 800 images in the two weeks we were up on Orkney and I’m just starting to work my way through them now to decide which I’m going to process and publish. Clearly this is going to take me a little while and I can already see that this trip will require a number of posts over the next few weeks to do it justice.